Here comes another one, just like the other one...

It feels like I've been doing a lot of the same stuff lately. Which is definitely true. But hey, I've done some painting and some gaming so it's not all bad.

Finished! I'm really happy with how this base has come out and putting it in with the rest of the army, it's a little out of place but not as bad as I feared. So now to basing these. 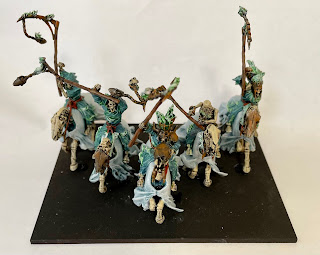 I've also added one more model to the Star Wars: Legion collection. This Imperial Officer will be a second-string commander for me when I want to add something that isn't Vader. It's a neat little model and very evocative of the Imperial style. 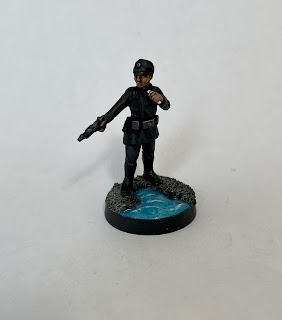 Pooch, Scotty and I got together for another game of Titanicus too. In this scenario, the Traitor Legions, having successfully landed in our first scenario, attacked the outskirts of the city of Lupercalia. The defending Loyalist Legio, supported by an off-table Imperator-class Titan, met the attacking forces at the edge of the city.

Scotty and I decided to attack at dawn, hoping to blunt Pooch's first turn fire, especially given that we were expressly not permitted by the scenario (and the Warmaster) to stand still.

Turn one was pretty gnarly - as the Traitors ordered "FULL POWER TO LOCOMOTORS" across the board, we took a barrage of incoming fire. And by we, I mean Scotty. One of his Reavers got pretty cut up and was reduced to zero shields as was one of mine (thanks to some accurate fire and poor saves!)


Turn two got real interesting real fast. Our knights lined up charges (mine on Pooch's knights) and his on one of my Reavers. I landed a charge from a Reaver onto a Warhound and it's chainfist carved up the Warhound with a bit of power to spare.

The knights threw handbags at each other (thanks to some janky void saves on both sides, as well as the staggeringly poor Avenger Gatling Cannons) while my two Reavers both gave the Knights that had the gall to attack them a bit of what for. I did forget to make split fire orders again though. Ugh. Scotty's Titans took another pounding with the first Reaver detonating and the second being heavily damaged.

Turn three and Pooch won Priority, which he REALLY needed to do to avoid the biggest risk of the below:

And then he failed to issue a First Fire order on a 2+, compounding the drama llama! The Reaver made the charge, with the Traitor Legion bonus, and made SEVEN chainfist attacks on the Warlord's head. One missed and three failed to damage. One more and it was close. Two more and that Warlord would have been wrecked. Legio Vulpa titans are scarily effective in assault and I'm definitely getting better at delivering them.


Our knights found some steel and Pooch's last Questoris knight battlecannoned mine to death. It was hilarious. Absolutely hilarious.


Finally, as Pooch deleted Scotty's second Reaver, his Warlord was exposed to the full force of the Loyalist fire and it was pretty close to wrecked by the combined fire of a Warbringer, Reaver and two Acastus Porphyrion knights.

Scenario wise, I don't think Scotty and I were expected to win this one, in much the same way that Pooch wasn't really expected to win the first one. Fluff-wise, we were a distraction for the Warmaster Horus to take down the Imperator Titan and basically raze the city so I guess we succeeded??

It was a tough scenario - Pooch had a solid defence and a lot of long range firepower. Our use of the Dawn Attack strategem helped on occasion (it kept one of Scotty's Reavers alive on two separate occasions) but never managed to keep the Acastus Porphyrion from shooting (and they did some serious heavy lifting). Pooch failing his 2+ orders TWICE in three turns was really what kept us in the game instead.  It was interesting also that we made it maybe half way through the game in just under 2.5 hours. When this game gets big, it also slows down noticeably.

Lessons? Acastus Porphyrions are scary and need to be kept moving, for one, or seriously focussed on to remove them. There are also some neat new strategems that we'd never used - Titan Hunting infantry were awesome. I had a flick through the FAQ after the game and I think, other than one final mistake in this game, we've nailed down the rules.

I'm going to start on the Storm Troopers for Star Wars: Legion. Krennic's given me enough confidence that I can get a good result that it's time I had a crack at it. Otherwise, I'll be tinkering with the basing on my Ghosties. I've got an idea in my head how I want to do it now which is pleasing.