Not been a lot of productivity this week due mostly to being on holiday with the Regimenters during which we played many boardgames, laughed a lot and ate some amazing food. It was most excellent. We did, disappointingly, not get around to our Gaslands Annual so that'll get played at a later date. We did, however, play a fair bit of Cthulhu, Death May Die:

One of the lads picked this up from a CMON Kickstarter about 3 years ago and he's been painting it up slowly since then while we've been playing it every now and then. It's a REALLY cool game. It plays up to 5 in a fully co-op game. I've often played as a kind of DM for the game, managing the turn sequence and all the things the Elder One is supposed to do, as well as keeping tabs on the monsters, summons, mission special rules and more.

Players arrive in a location where there are inevitably cultists summoning one of the Elder Ones and they must disrupt the ritual before the Elder One arrives in the world. Ideally, they've done this, otherwise they have to try and do it while the Elder One is stomping about the place! One the ritual is disrupted then they have to banish the Elder One.  The game is mechanically simple with a basic turn sequence and, as it is fully co-op, it doesn't get bogged down in monster phases.

It captures the Cthulhu mythos very well as the players have to durdle around this world, trying to stop a ritual, beset by monsters and going more and more insane. As they go crazy, they learn more about the mythos and become more in tune with their innate abilities. They all have unique combinations of abilities (some are magically inclined, some are quick or sneaky, others are more fighty) they also have unique mental conditions that trigger whenever they've seen enough weirdness.

Finally, it's got so many cool components. Leaving aside the lovely player-characters and monsters, the Elder Ones and their minions are amazing. Perhaps one of the best buts though, are the player boards. You can see one on the left of the photo above. The character card slots in between two plastic covers that have holes for the health, stress, sanity and madness markers as well as any items or companions the players discover.

We've played nine of the 15 episodes that exist with a mix of the Elder Gods and we could easily go back to episode one and play it again just picking one of the different gods. Also, there is a mission with moose. And dynamite. And aliens. Yup. It's a great game!

Still managed to get a few Stormtroopers finished this week too. The specialists pack has added some good options to my Stormtrooper choices. 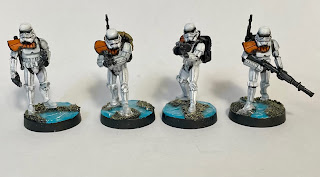 From L - R, the Stormtrooper Captain, the Specialist, the R97C (it's really an MG42 with a box mag) and the T21 launcher. The Captain will help trooper morale, the Specialist provides new gear and the other two add some interesting firepower choices.