Plans for our club escalation 40K season thing are coming along with the first 500 point day some time in April. As a result, I am starting to get myself together and crack on with the the Spectrus Kill Team that is the basis for my 500 point build. 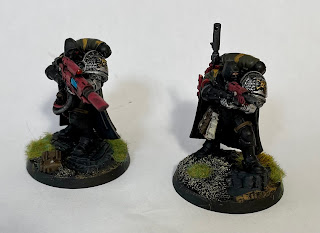 On the left, a Las Fusil and on the right a Bolt Sniper Rifle. I really love the Sniper pose with the pistol out and couldn't not build this model!

These two were a bit of a challenge as while the kits have lots of options, there were really only a couple that left me able to fit a Deathwatch shoulder on the left and neither of these two marines has a visible chapter marking on his right shoulder. As a result, one has a tiny strip of Blood Angels Red and the other Ultramarine Blue.

The second part of the Kill Team was a trio of Incursors, one with the necessary and rather delightful Haywire Mine. 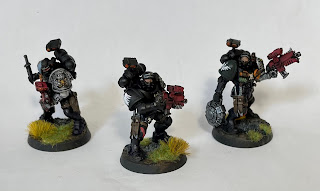 These (as part of the Infiltrator kit) were sweet to assemble too - there are a fantastic multi-part kit. I really like the one on the left, a Space Wolf with a throwing knife! Seems wonderfully appropriate.

Blogger Scotty hooked me up with this little gem - the easy-build Phobos Lieutenant from one of the older Primaris-containing box sets. 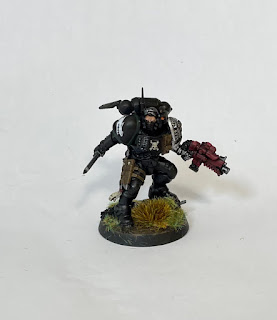 The LT was a bit of a challenge from an assembly standpoint as an easy build. The whole left arm had to come off and be replaced by one from the Infiltrator kit - the Deathwatch shoulder would not have fit otherwise - and the right required serious attacking with a file to get it filed down enough to fit the normal embossed shoulder.

I've got six (maybe seven) Infiltrators to do for the rest of this Kill Team. I've got their base washes done but no colour on them yet. They're a nice break from Stormtroopers for a bit although I really should get cracking with the second bunch of white armour soon so I can get a game of Legion in with my own stuff!