Warma-finity - or 2 systems in one day

Sunday 26th was the Hutt Club meeting date at the end of April, it would usually have been the saturday but the school hall was being used for an ANZAC day service.

One of the little projects I've had on the back-burner for a little while is a campaign system for Warmachine. I enjoy one off games as much as the next magpie but nothing beats playing a series of linked games where you can really aim for a strategic goal. The best systems ensure that the results from earlier games have a noticeable impact on future games, and not necessarily in terms of inceasing or decreasing the number of campaign turns are needed.


Warmachine is one of my games of the moment, well, the last 6 years or so really but let's just keep with "moment" :). Privateer Press came up with the idea of a map based campaign system in their Mark 1 warmachine release "Apotheosis". For those not in the know, Warmachine has been around as a tabletop game for roughly 11 years and in 2010 the rules received a major shake down - MK2. This changed the unit points system, streamlined a whole raft opf rules and re-base lined a number of models that had succumbed to power creep. All in all, after an initial gnashing and wailing from a few players as their "broken" combos no longer worked, the re-work was generally considered a very good move and the game received a meteoric surge in popularity. Unfortunately, this also meant that a lot of the campaign rules in Apotheosis no longer worked, Points scales and scenario victory conditions had changed significantly. 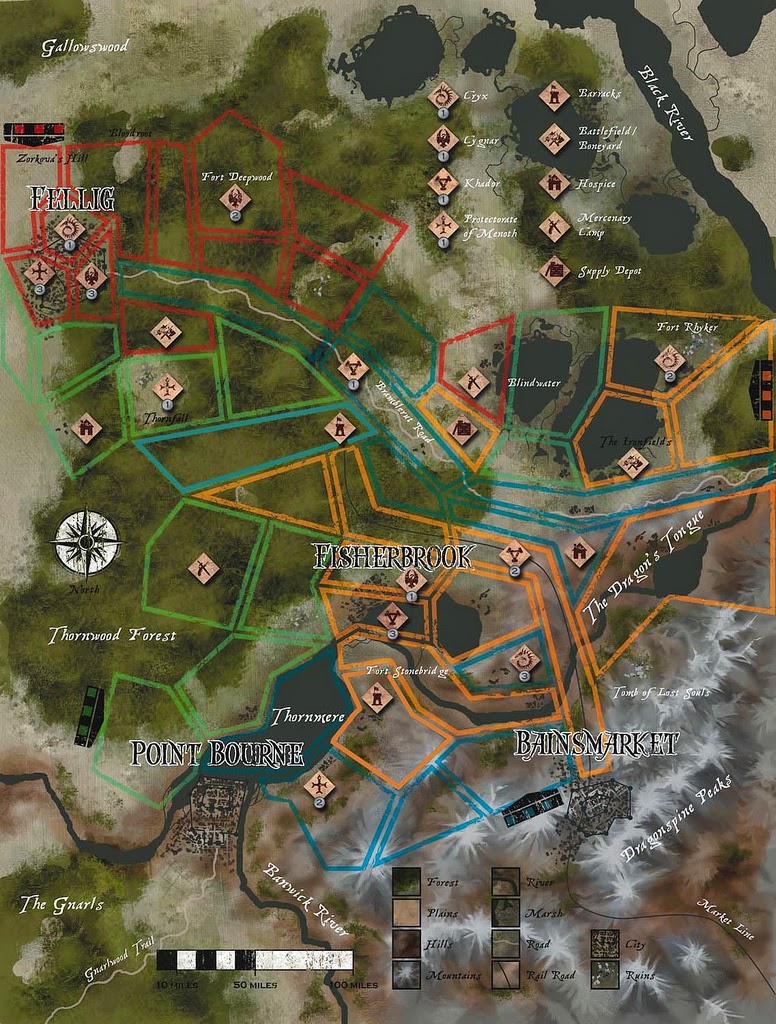 The original campaign map scavenged from somewhere on the interwebs

This wasn't good enough! So,  a couple of months ago, I suggested to Tom, Scott and Alex that I'd like to have a go at re-writing the campaign rules whilst trying to keep some of the more "fluffy" elements of the original system intact (scenario balance was quite an original concept in the early days of Mk1 so some things were a little wonky!). They were enthusiastic so, after a few weeks work, the 26th was chosen as the club day for round 1.

Each of us chose a warmachine faction - Alex had protectorate of Menoth, Tom - Khador, Scott - Mercenaries (as a replacement for Cygnar) and I had my usual undead Cryx-iness.

We each had 3, 50 point armies to use and could attack territories up to 3 map spaces away. Victory could be achieved by either controlling 22 map zones or completing your 3 fixed "Strategic Objectives" - each one tied to a specific map section and with a unique scenario.

Round 1 kicked off with Tom and I facing off whilst Alex and Scott played their scenario out. I had gone straight for one of my strategic objectives whilst Scott was surrounded in the middle of the table in a last stand scenario against Al's Menoth. 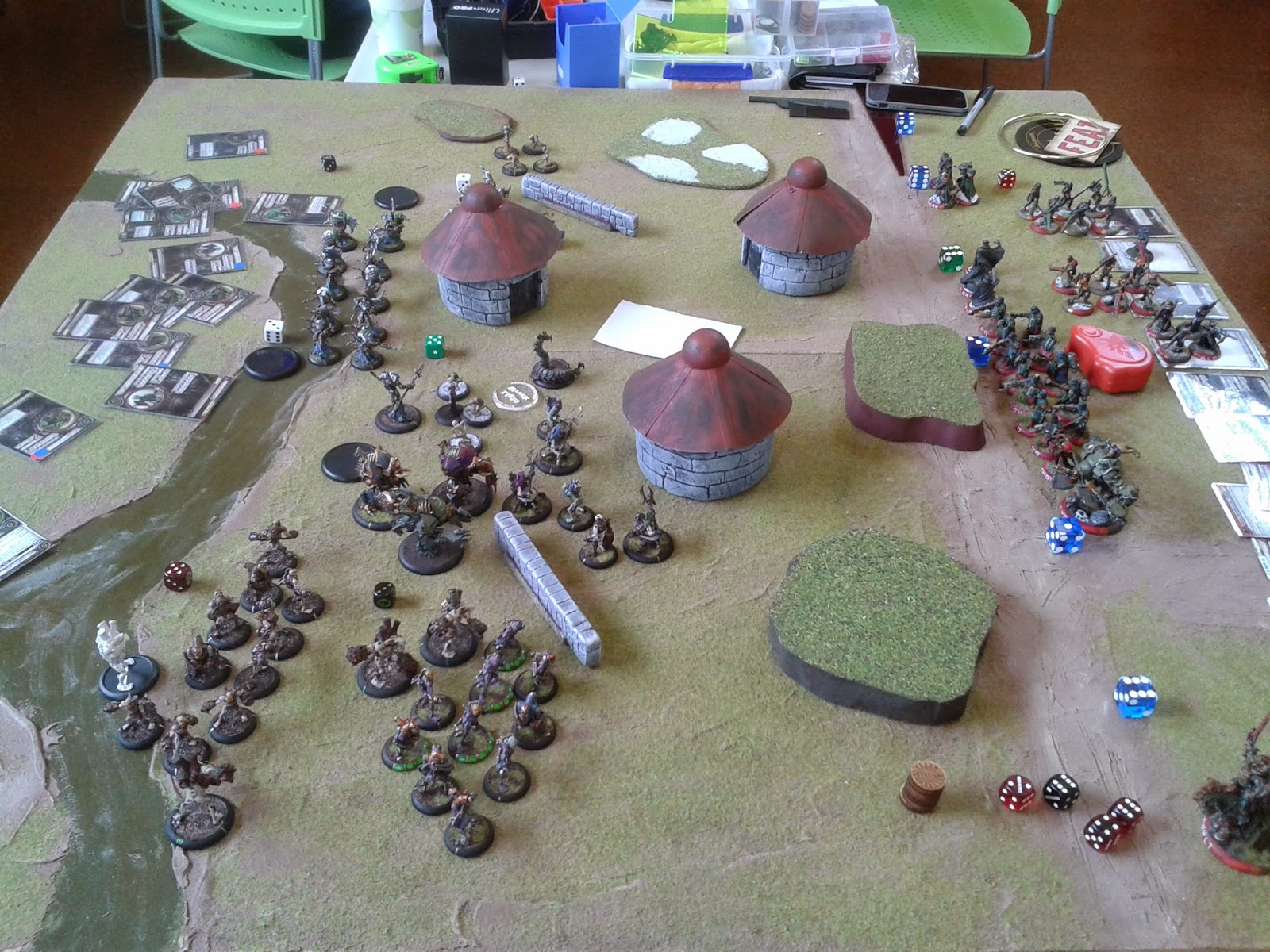 My Cryxian horde of zombies led by Iron Lich Asphyxious (left) faces off the army of the Motherland led by Vladimir Tzepesci, The Dark prince. My mission was to find an artefact located in one of the three buildings in the centre of the board and carry it off my table edge - much harder than it sounds in Warmachine! 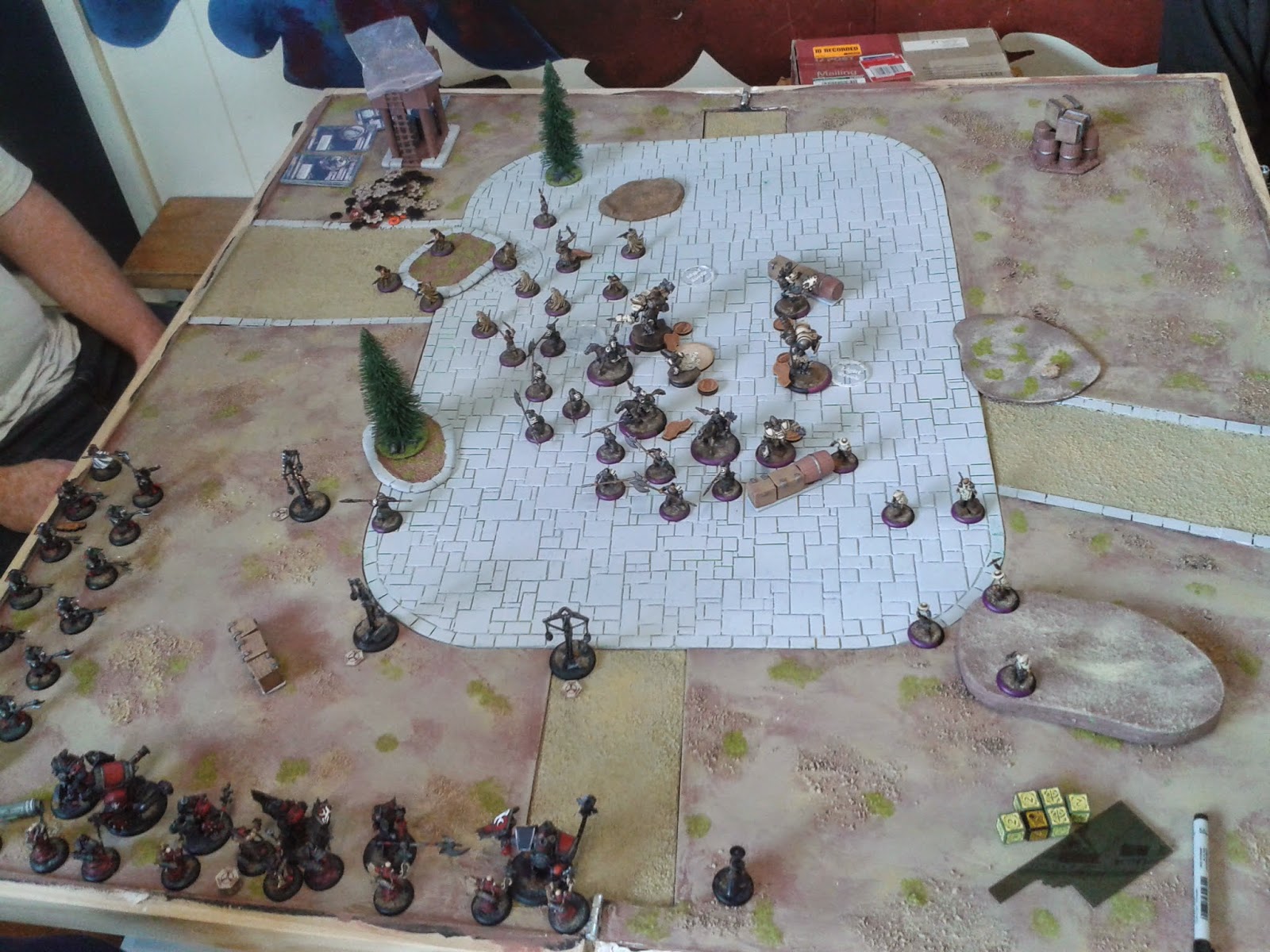 Scotts Mercenary army led by Magnus the Traitor is cornered by Al's Menoth led by... some Warcaster who's name I have completely forgotten. Both sides win by killing their opponent's caster :)

Al and Scott's game was over relatively quickly - i can't remember who won it right now but I'm sure one of them will drop a comment below to clear that up :)

Tom and I's game lasted a wee bit longer - maybe 2 hours longer! At the end of the game I had only my Warcaster left whilst Tom had his caster, 2 widowmakers a couple of Assault Commandoes and a dog (yes, a dog) I had just baited Tom with my Slayer warjack and he committed his Warcaster to kill it. This left him just close enough for my Warcatser to walk up and put an end to the game - it was a close one!

After this game, Tom moved on to running a game of Flames of War for Scott and another first time player so Al and I broke out our infinity minis for a first run through the V3 rules - and we were impressed! 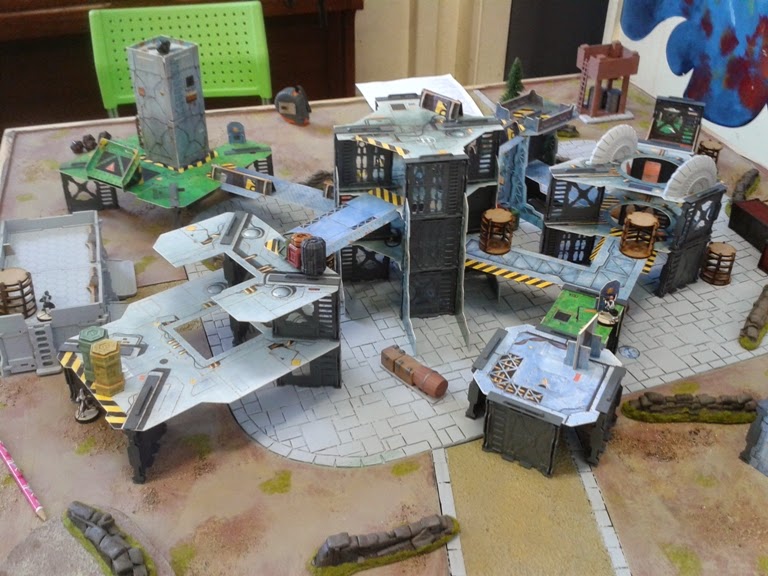 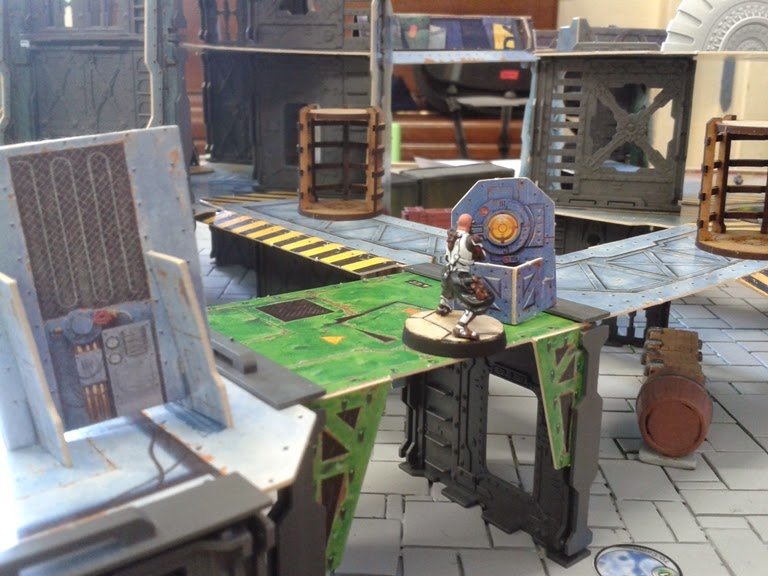 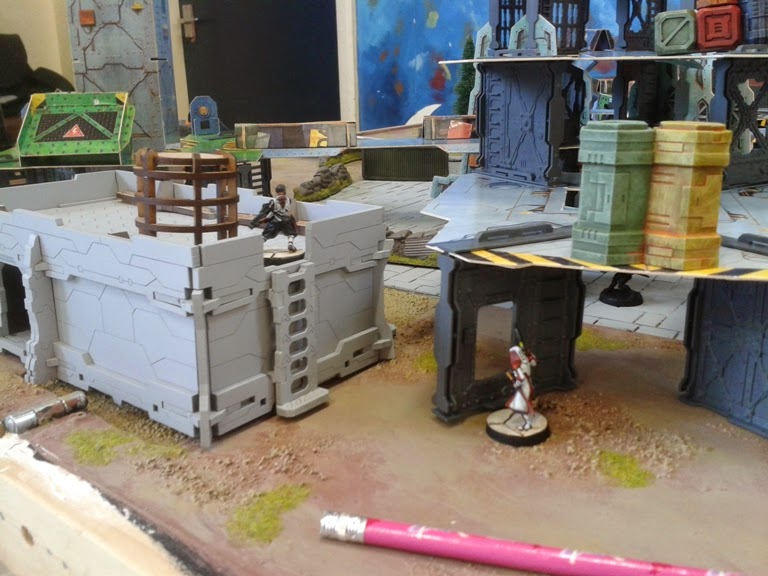 It may just be that the rules are explained a lot better in this version of the game as well as the streamlining that the developers have put into the game sequences and skills - particularly the ARO sequence, that could be nightmarish in V2! but this game played really well - we each used the starter boxes for our respective faction - Al had his Ju Ching Chinese sectorial army and I had my Ju Ching Japanese sectorial force - so a sort of intra faction "training exercise" :) We played the game out in about an hour and were both left wanting more! I think the next club meeting will see several more games played with a few more of the Magpies involved :)